Storage demand continues to rise for most companies as processing tools get more sophisticated. For network system managers, it means getting the highest performance out of every server. Configuring the RAID Controller is a key step to achieving it. To help you do it, here are easy steps for configuring a Dell PowerEdge Server RAID Controller (PERC) H730. 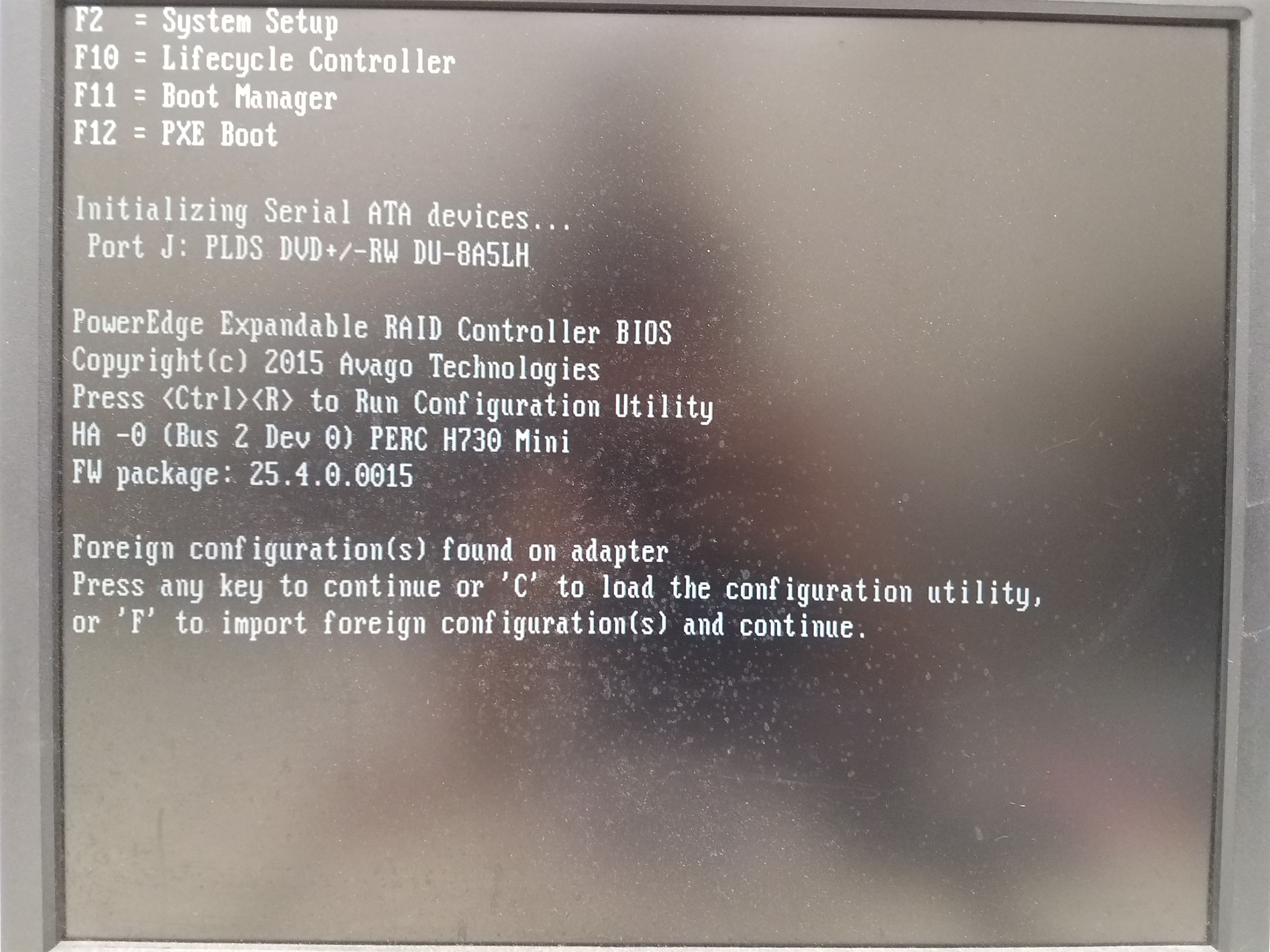 The management screen shows all of the disk groups and virtual disks created on the raid controller. Most of the configuration can be done from this screen by highlighting the very top line, which will reference the H730 controller. Once highlighted, press F2 to open up a drop menu with a number of options. The first of which is going to be creating a Virtual Disk. See image 2 and 3. 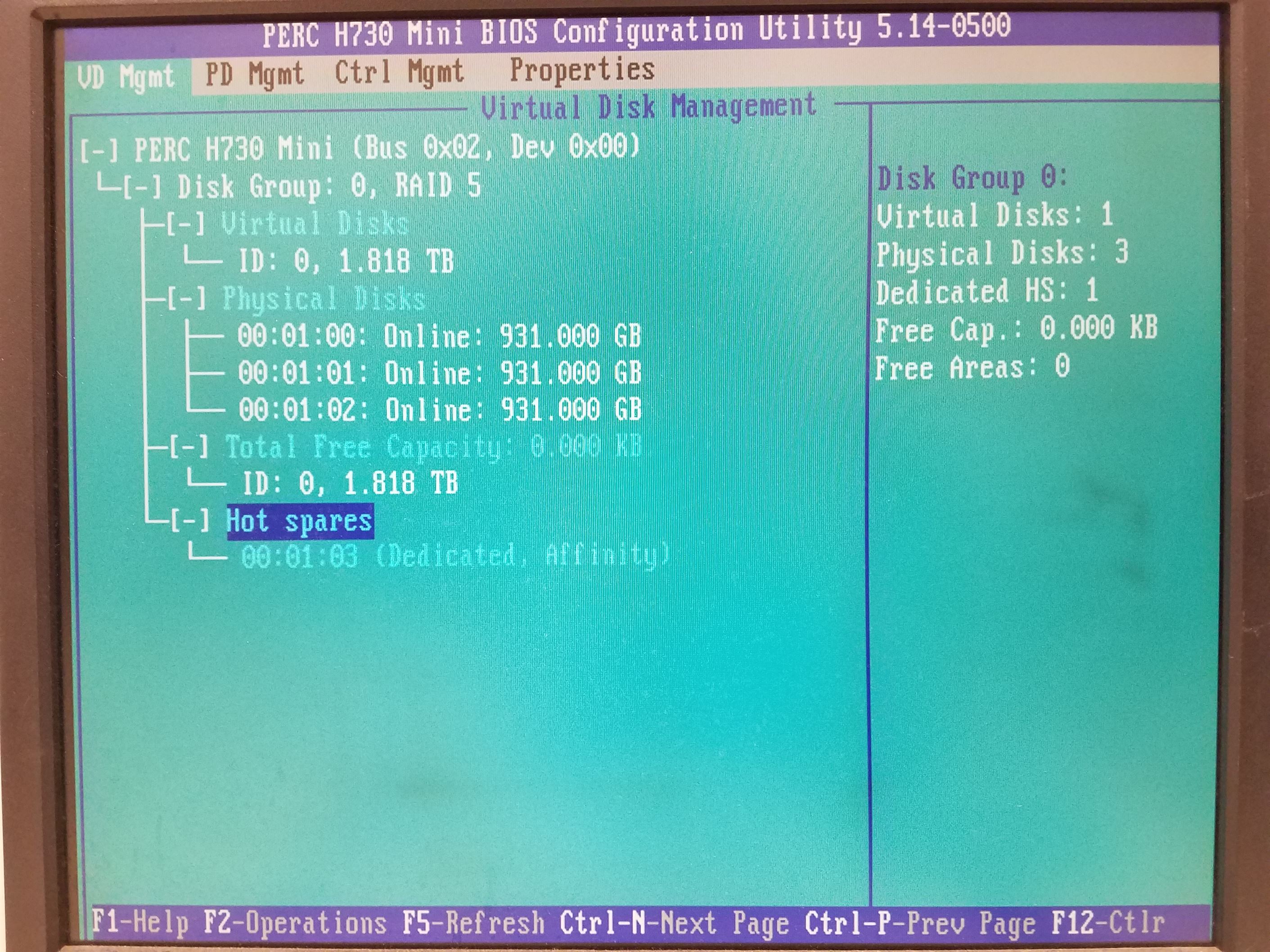 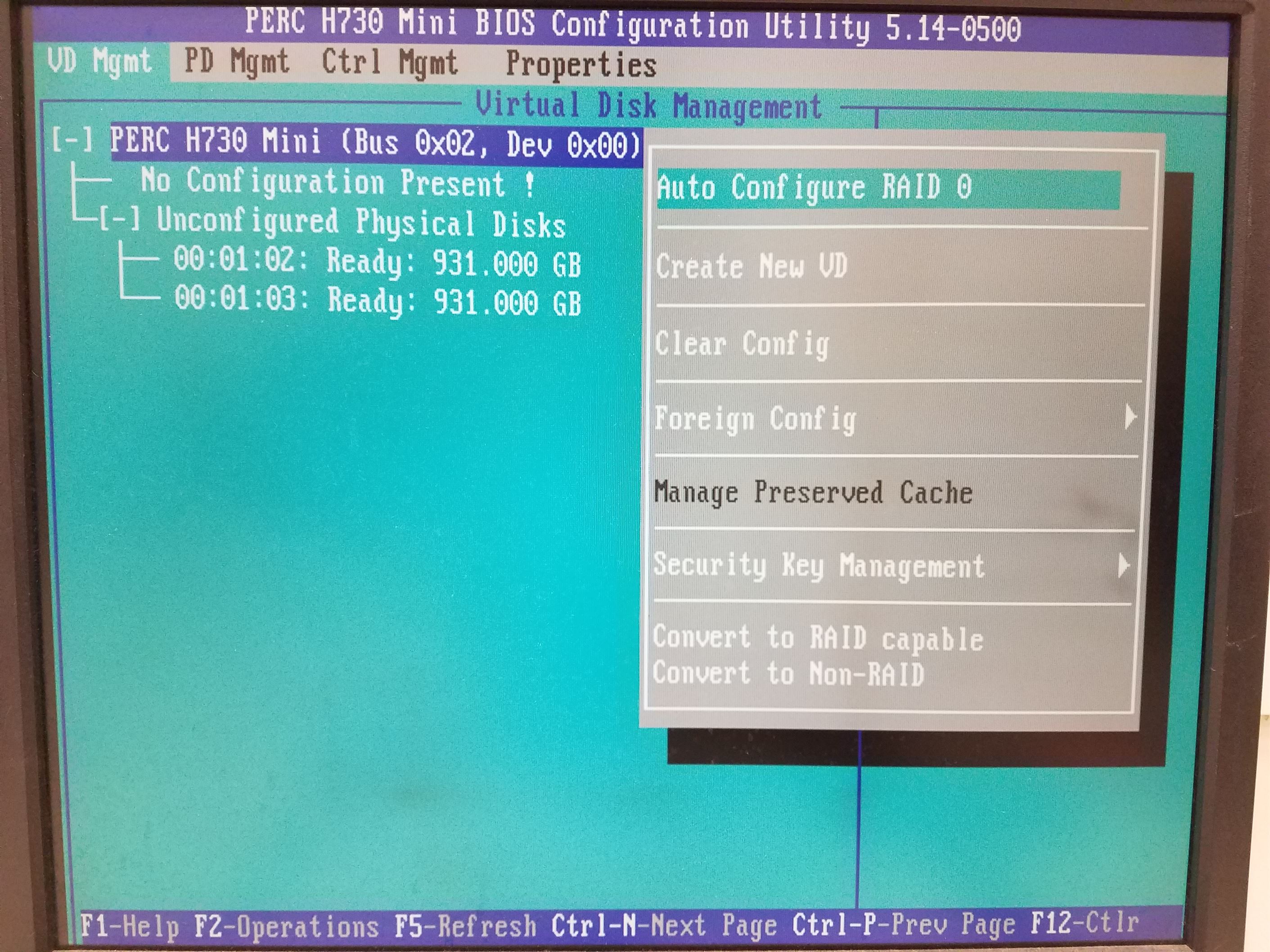 Once you’ve selected " create Virtual Disk" you will be greeted by a new screen with options for the raid level. You will see Virtual Disk size, name, and selection of what available disks will be a part of the array being created. 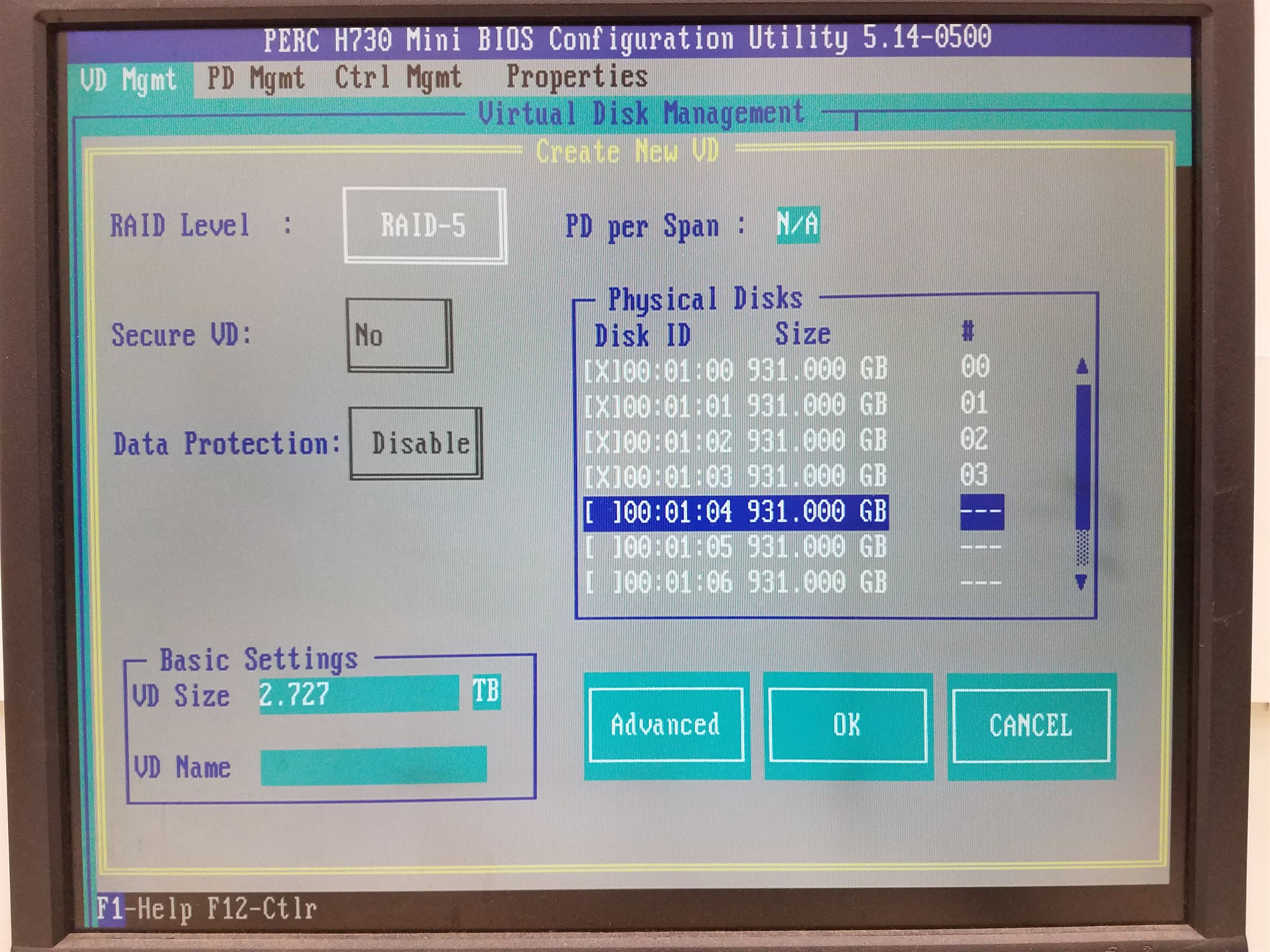 Once the Virtual Disk is created, you will get a message saying the newly created Virtual Disks should be initialized. In order to do this, you will need to scroll down to the newly created Virtual Disk and press F2 once highlighted. It will pull up a drop menu with Initialization being the first option. Press the right arrow, and it will bring up a secondary menu with Start Init, Stop Init, and Fast Init. being the options. Fast Init will only take a few moments, but it will do a full initialization in the background after the fact. Start Init will start the full initialization, which can take hours depending on the size of the Array.

The next option within the f2 menu is Clear Config which does exactly what the name suggests. It will wipe out all raid arrays that have been created on this system. This should only be used if your intent is to start fresh with the drives and controller.

Foreign Config is the next option but will only be selectable in very specific circumstances. Generally speaking this will only come up when dealing with drive failures or replacing of drives. If you’re experiencing issues and some or all of your drives have gone into a foreign state and you’re not familiar with raid you may want to contact a consultant or IT professional with experience as there can be multiple different triggers for this and data loss is possible depending on what has gone wrong and what actions have taken place to attempt to fix it.

Next is Security Key Management which will be used when setting up SED drives(Self Encrypting Drives) This allows you to set the security key for your SED drives so that if the drives were ever stolen the data on the drive is entirely encrypted and inaccessible without the key. This is entirely unused when using standard drives.

Lastly, there are the options for converting drives to be RAID capable and Non-RAID. This allows you to use individual drives as a passthrough,  whereas in RAID capable mode the drives need to be in a raid configuration to even be accessible by operating systems. This is a new feature on the H730 as prior to this you would be required to create single drive RAID 0 devices to utilize single drives.

The Physical Damage Management screen is where all of the information about individual drives is located. It will give you information regarding drive type, size, condition state, disk group, and drive vendor.

There are 6 different drive states that a drive can be in.

- Ready: Means the drive has no current configuration and is ready to be used.

- Online: Means the drive is currently in an array and functional

- Failed: Means the drive is failed and unusable.

- Foreign: Means the drive has a configuration on it that doesn’t match what the raid controller expects. If this has happened on a previously functional system there is likely an underlying issue or error that forced the drives into a foreign state.

- Hotspare: Means the drive is currently setup to automatically rebuild into an array if a drive fails.

Non-RAID means the drive is currently in passthrough mode, and will allow the drive to be accessed individually within an operating system. See images 5 & 6. 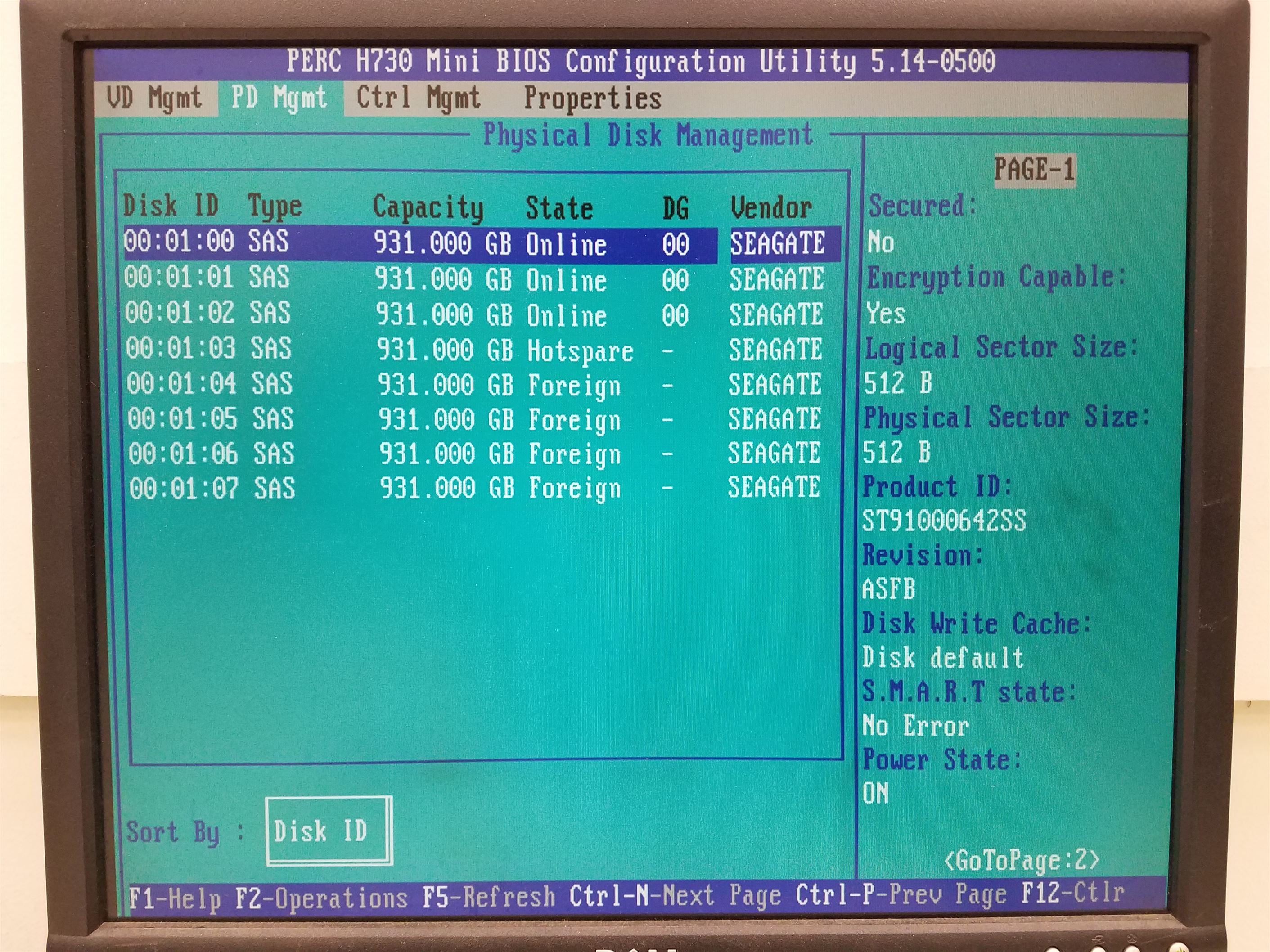 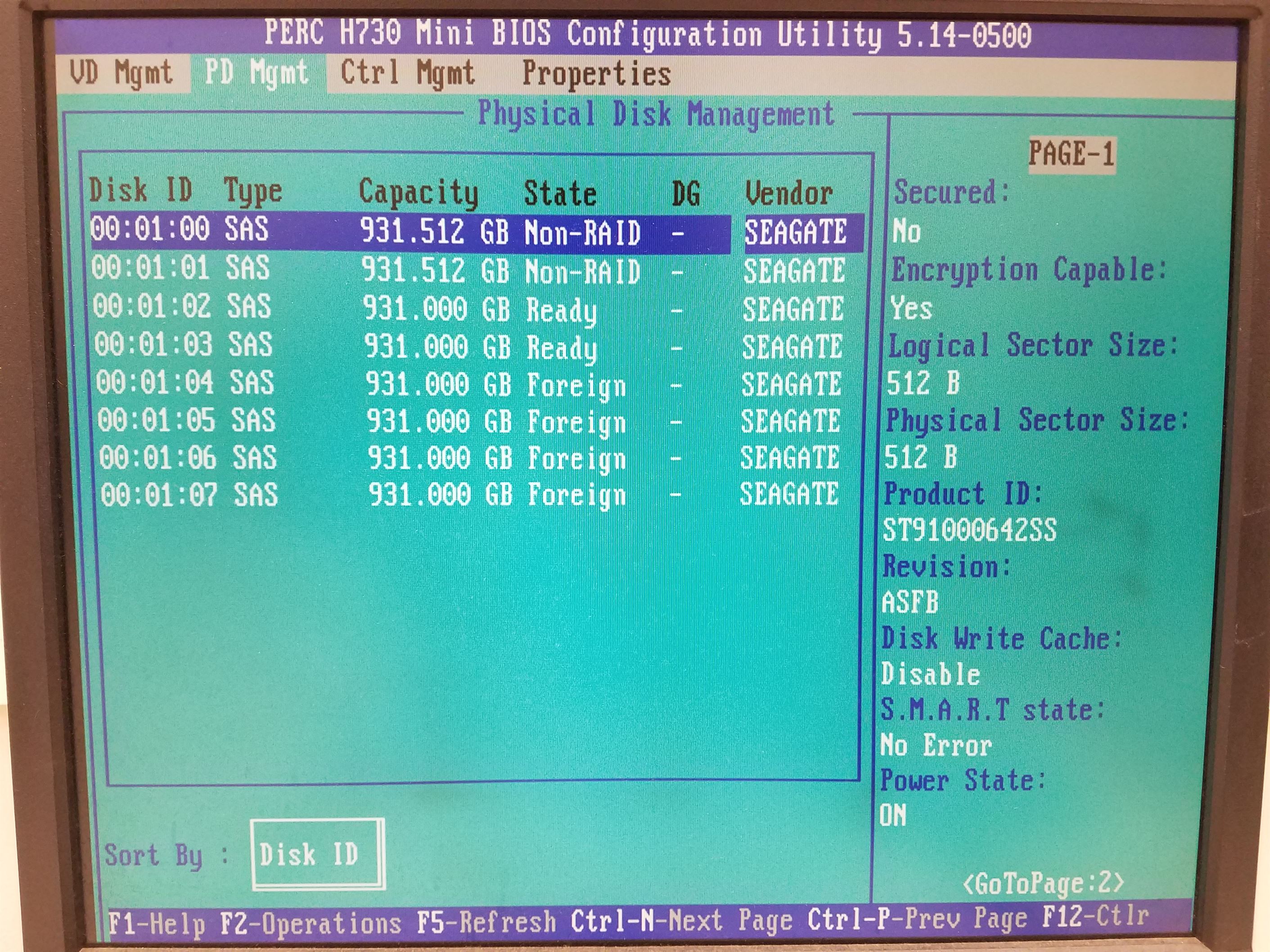 The Controller Management screen has a number of options for the raid controller itself. It also has an option to factory reset the controller to default settings. 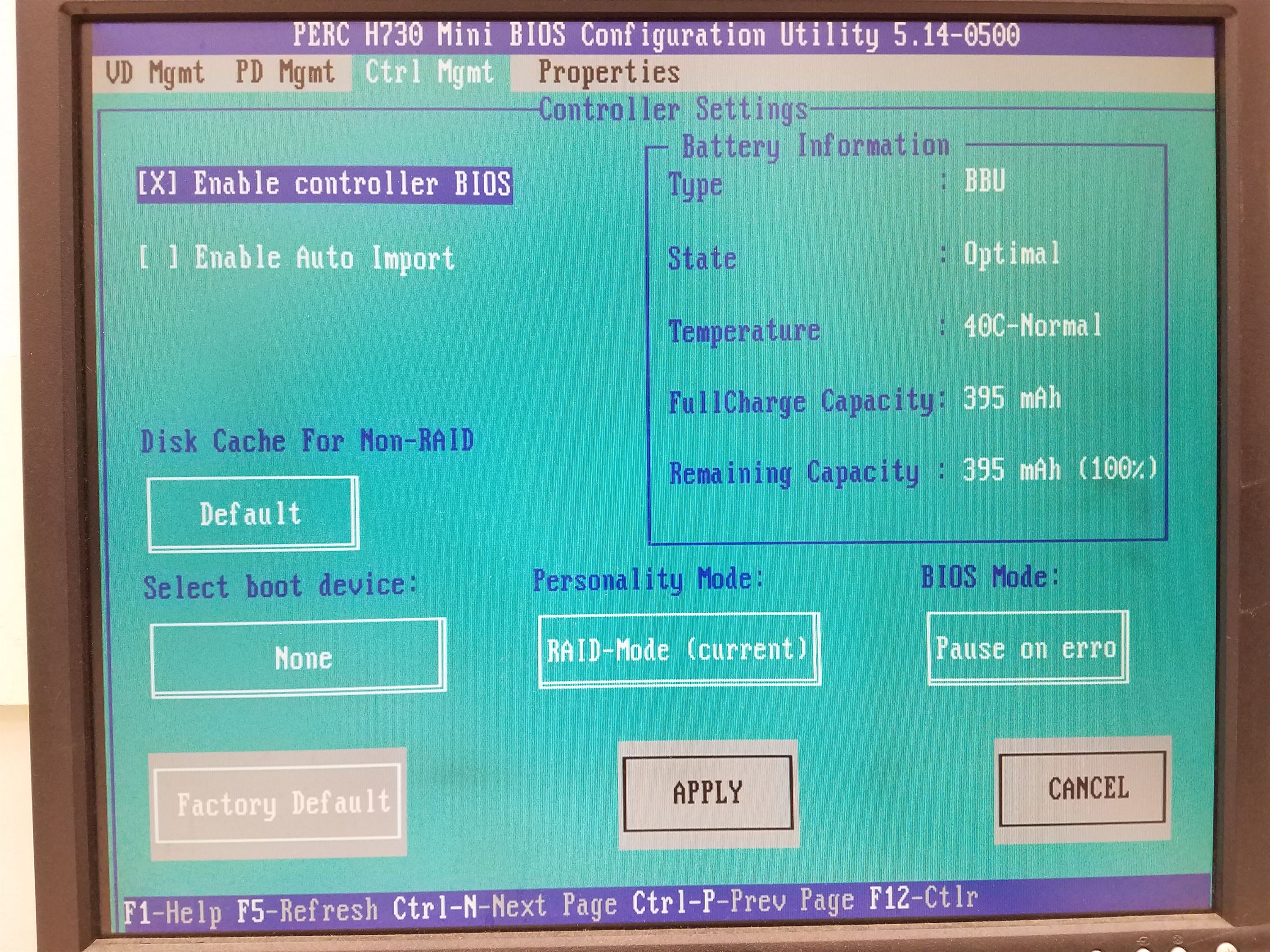 The Properties screen is where you will find information about the controller itself such as the firmware version, temperature readings and controller status. 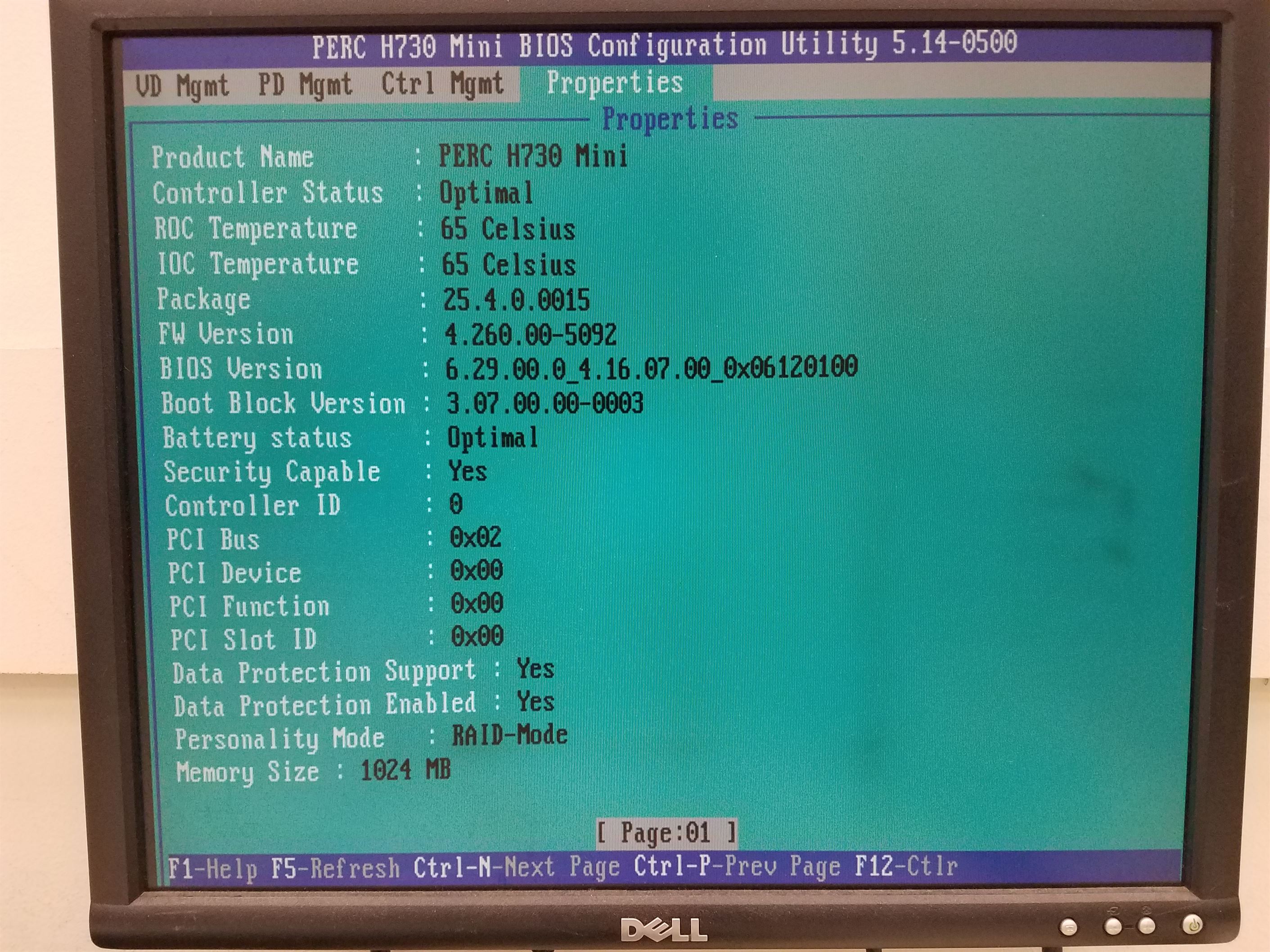